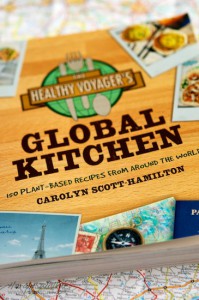 The Healthy Voyager’s Global Kitchen is a new cookbook by Carolyn Scott-Hamilton for the vegan travelers among us and those that like to eat internationally. Carolyn is the creator of the popular The Healthy Voyager web series, radio show, website and blog.

In this book 150 interesting recipes are being presented by country and region. They are vegan adaptations of good and representative recipes from the counties that were selected. It offers many main dishes, but there are also plenty of desserts, snacks and appetizers. Each recipe has handy icons on the page indicating if it is: gluten free, soy free, low fat, low glycemic, kosher or raw. Carolyn also gives fun tips and background information about the recipes.

Celine Steen form Have cake, will travel took the excellent photos and did her best to add a regional twist to each photo. About 1/3 of the recipes have a photo. As many recipes might be unfamiliar for the reader, we believe, that more photos would have been nice.

For this review we prepared three recipes of The Healthy Voyager’s Global Kitchen (click on images to see the full size):

Arroz Con Pollo (page 107, Spain)
‘Arroz Con Pollo’ from the Spain chapter was a recipe we really enjoyed for lunch. It could be because it has both wine and beer in it, but it also offered a delicious blend of many other vegan ingredients. Instead of vegan chicken cutlets one could also use tofu or seitan which might be easier to get.

Mushroom Po’ Boy Sandwich (page 36, USA)
These were very tasty sandwiches. The vegan mayo sauce was particularly nice with them, as well as the tomato and lettuce.
The cornmeal breading was a bit difficult to stay “stuck” to the mushrooms while sautéing. But, it still worked out o.k. and tasted great. It was interesting to read the tip with information about the history of the Po’ Boy Sandwich.

Picadillo Autentico (page 67, Latin America)
This did indeed tasted like authentic picadillo. I have always enjoyed the combination of green olives and raisins in picadillo. And the seasonings for the recipe are excellent including the cinnamon, and cumin as well as other spices. We served it as traditionally eaten, with white rice, and minced coriander/cilantro on top. This is one of those meals that I’m sure omnivores would enjoy as much as vegans. We used TVP instead of the vegan ground beef for the recipe, which made it an economical meal.

This cookbook takes the reader on a delicious vegan journey around the world. We believe, that many of the recipes would also be enjoyed by people who are not vegan. Some of the recipes use costly and may be hard to get vegan meat or dairy alternatives like tempeh bacon, vegan chicken cutlets or vegan beef bouillon to veganize traditional recipes, but in most cases these recipes could also be adapted to use available, home made and more affordable alternatives.

The Healthy Voyager’s Global Kitchen was published by Fair Winds Press and is available as paperback for $19.99 or digital edition (different prices depending on store and format).