We found this delicious stew/soup recipe at the food section of washingtonpost.com. 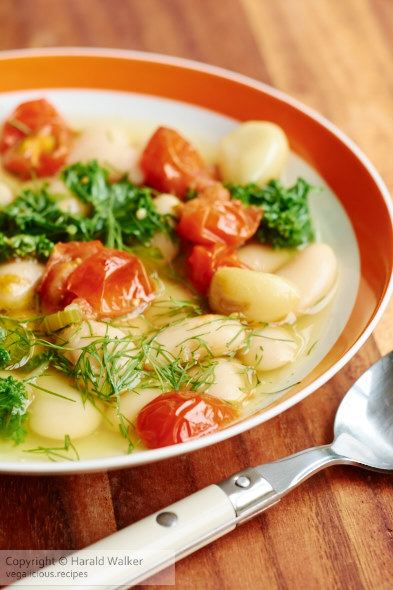 It was almost vegan and just needed a bit of tweaking, mainly for the “lemon-honey sauce”. Most vegan sweeteners like agave would work as a honey replacement but I would not recommend maple syrup as it is too strong of a flavor. We used elderflower syrup that we made last spring.
We made the soup a bit differently than directed, as we also wanted to save the liquid from soaking and cooking the beans. Lately this liquid is called aquafaba. We have recipes we want to make using this liquid. So, overnight, we soaked the beans, then cooked the beans in the liquid until soft. Meanwhile I also made the broth (and kept the celery etc in the broth as it is too healthy to throw away). Once the broth was ready we used a slotted spoon and placed the cooked beans in the broth and saved the bean liquid for later use. The rest of the recipe we basically did as described. Roasting the tomatoes and garlic etc. We enjoyed the soup/stew, and will  certainly make it again.