Tomatoland: How Modern Industrial Agriculture Destroyed Our Most Alluring Fruit

This week Andrews McMeel Publishing releases Tomatoland, a book in which investigative food journalist Barry Estabrook reveals the huge human and environmental cost of the $10 billion fresh-tomato industry in the US. 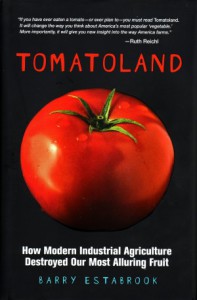 The story begins simply, with Barry finding himself behind a heavy truck in Florida, laden with what appear to be green Granny Smith apples. Some of these orbs begin to fly off the truck, but they turn out to be tomatoes “so plasticine and so identical they could have been stamped out by a machine.” A few have cracks, most are unblemished, and not one is smashed, despite the long drop at 60 mph.
The story ends with Tomatoland, an exposé of today’s agribusiness systems, which produce industrial tomatoes as lacking in nutrition as they are flavor. Of all the fruits and vegetables we eat, none suffers at the hand of factory farming more than a tomato grown in the winter fields of Florida, which accounts for one-third of the fresh tomatoes grown in the United States. Modern agribusiness can’t deliver a decent-tasting tomato in large part because it’s essentially against the law; regulations set by the Florida Tomato Committee determine what a tomato should look like, and the older, tasty varieties don’t conform to the rules of color and shape.
As Barry explains in this fact-filled yet approachable book, consumers and society pay a price when we take taste and thought out of our food purchases:

There’s no doubt anyone who longs for the flavor and texture of a truly home-grown tomato—will want to hear the messages of Tomatoland. Tomatoes are America’s second-most popular produce behind lettuce, with Americans buying $5 billion worth of commercially grown fresh tomatoes in 2009. And nearly nine out of 10 backyard gardens include tomatoes.

Investigative journalist Barry Estabrook’s 2009 article for Gourmet magazine, “Politics of the Plate: The Price of a Tomato,” won a James Beard Award in 2010. In addition to being a Gourmet contributing editor for eight years, Barry was founding editor of EatingWell magazine and has written for The New York Times Magazine, Reader’s Digest, Men’s Health, and The Washington Post. He contributes regularly to The Atlantic’s Web site. He has been interviewed on numerous television and radio shows. Barry tends his tomato patch at home in Vermont. politicsoftheplate.com

Disclaimer:
Every item purchased from Amazon.com after following any of the above Tomatoland links generates commissions that support this site.