The most flavorful vegan cookbook 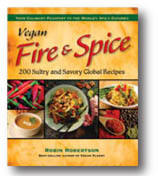 “I’ve made Vegan Fire & Spice everything I’d want in a collection of spicy international dishes,” the author commented. “Vegans can now easily make their own boldly seasoned Indian and Thai curries, African stews, and Middle Eastern kebabs and pilafs, and these recipes are now all in one place. I also provide recipes for Szechuan stir-fries, Moroccan tagines, Indonesian satays, Italian pastas, as well as favorites from the Americas and Caribbean.”

The recipes range from mildly spicy to nearly incendiary, however Robertson added that while cooks can make the dishes as hot as they wish, the recipes can also be made without any heat at all. With international recipes such as Red-Hot White Bean Chili, Vindaloo Vegetables, Thai Coconut Soup, and Penne Arrabbiata, she insists that anyone can enjoy them without bursting into flames.

As culinary passport to the spicy cuisines of the world, Vegan Fire & Spice is organized by geographic region, each with a recipe mini-index organized according to appetizers, sides, main dishes, soups, salads, sauces and condiments.

For sample recipes, information about ordering, discounts, and autographed copies, or to or find out more about Robertson’s other books, visit her website.